This week’s cover of the UK, continental Europe and Middle East edition of The Economist reads “That sinking feeling (again)” and features the German Chancellor, France’s President, Italy’s Prime Minister and the President of the European Central Bank (curious to see two Italians on board…) on a sinking boat made of a 20 Euro note. 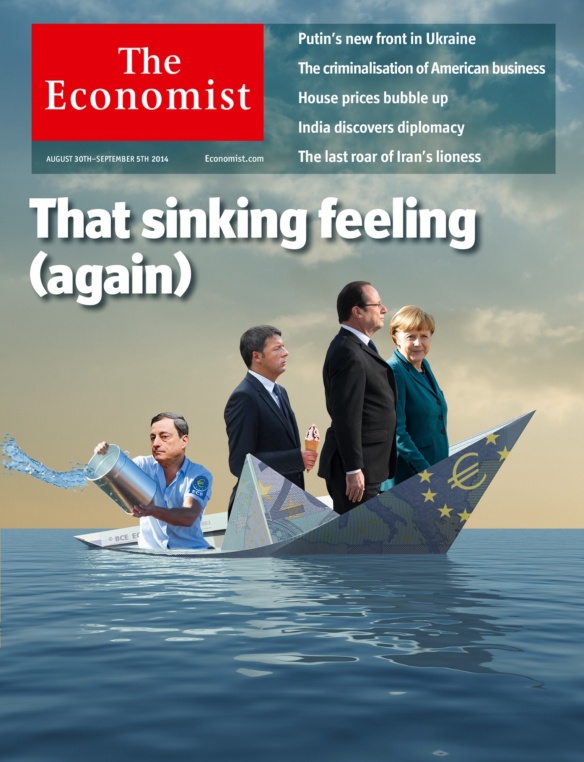 The Economist’s European cover of 30 August 2014

The Economist’s covers are worth a thousand words.

They are thorough, they are witty and, even when I might not like them, I love to read between the lines.

Inside the paper, the “Leader” piece focuses on what might threaten the survival of the Euro.

“If Germany, France and Italy cannot find a way to refloat Europe’s economy, the euro may yet be doomed”,

…there is a shortage of political leaders with the courage and conviction to push through structural reforms to improve competitiveness and, eventually, reignite growth

…the country that most dramatically epitomises all three is France

Not much about Italy, nor about its Prime Minister, with the exception of a few lines such as those:

Mr Hollande is not just deeply unpopular; unlike Italy’s Matteo Renzi, who has bravely made the case for (as yet undelivered) tough reforms [the underlining is mine]

What has drawn some local controversy is the image of Italy’s Prime Minister, Matteo Renzi, holding an ice cream in his hand (see for example this tweet of Ferruccio De Bortoli, one of the Country’s leading journalists, editor of Il Corriere della Sera, who blames the Economist’s “bad taste”).

But what can we really read in the Economist’s putting an ice cream in the right hand of Matteo Renzi?

In the 1905 book The Joke and Its Relation to the Unconscious (German: Der Witz und seine Beziehung zum Unbewußten), as well as in the 1928 journal article Humour, Sigmund Freud noticed that humor, like dreams, can be related to unconscious content. In other words, with humour (here: with the ice cream in the hands of Matteo Renzi), the Economist lets out forbidden thoughts and feelings that the conscious mind usually suppressed in deference to society (see here for further thoughts on Freud’s view of humour).

Humour expresses unconscious desires that have been kept hidden for too long.

How about, for example, that feeling of forbiddenness that an ice cream can evoque?

Also, the very wish that the Euro area might collapse can be at the top of the unconscious (or even very conscious) wish list of not so few of the readers (and editors) of the Economist.

Yes, Matteo Renzi’s ice cream might remind the Economist of this and much more.

Yet let me repeat one thing very dear to me: the European Union (and the Euro) is here to stay.

President Draghi’s now famous “Whatever it takes” statement deserves to be re-read in its full clarity (as Open Thinking did at that time):

We think the euro is irreversible…But there is another message I want to tell you.

Within our mandate, the ECB is ready to do whatever it takes to preserve the euro. And believe me, it will be enough”.

Let me now remind what Benjamin Franklin replied, when someone stated to him, in 1776, “We need to hang out together”.

“Yes, was his reply, we need to hang out together, otherwise we will hang out separately”.

And together we will make it.