A stimulating and thought-provoking piece of Andrew Hill in the Financial Times aims at discussing “Rules of engagement for leaders on holidays”.

I particularly favour his view that

CEOs who do succeed in casting off (…) will benefit not only from the holiday, but from the improvement in mutual trust with their senior team when they return.

Establishing and fostering mutual trust amongs senior team members is a crucial mark of distinction for a successful CEO and a capable leader. Taking a good couple of weeks off can actually do a lot of good to colleagues if the CEO succeeds in empowering them properly and making them feel so.

This needs to happen, however, during the CEO’s entire tenure. Building a sense of delegation within the CEO’s team is at the same time very critical and quintessentially distinctive of a great leader.

I would even go as far as to say that the ability to take a proper break and cast off successfully (including properly facing emergencies or surprises) is a great indicator of someone capable to delegate and perhaps even someone good at devising, in proper course, a successor.

In addition to building trust amongst team members, Hill also very properly points out, in order for a CEO to be able to take a proper break, they will also need to be well-informed, so as to face emergencies effectively. Selecting how they can be well-informed is another more general competency of a good CEO. It is always a fascinating experience to see how good CEOs succeed in accessing an effective selection of instruments to guarantee they are informed. In this respect, personal relationship with key influencers is always a great tool for great leaders to ensure they access relevant info at the relevan moment in time. In every CEO’s relevant information space, we want to rapidly identify people we like and we trust, also as crucial sources of information, even in case of emergency.

In summary, delegation and personal relationship are key to a CEO’s ability to be a great leader, as they are for the CEO’s own ability to take a restful, effective and fully satisfying vacation break.

Disruption as a source of value in someone’s professional history has been the subject of a number of recent HBR posts, including one from Whitney Johnson and one from Claudio Fernández Aráoz, an undisputed thought leader on the subject of making #greatpeopledecisions.

Disruption requires the ability to create a disconnect, learn and benefit from it.

Creating a disconnect requires awareness, courage and empathy: it requires awareness of our feelings and fears, as we initially often fear disconnects,  while we like dealing with the same and again; it requires courage to recognise our fears and move on, temporarily leaving our comfort zone, so as to grow it over time; it also requires empathy so as to put ourselves into somebody else’s shoes, being able to share our thoughts, listening and learning.

Creating a disconnect requires unconventional wisdom, being able to pause and think, taking the time to find people who inspire us, connecting with them and sharing thoughts with them.

Disruption is listening, creating room for those we like, asking open questions, then keeping silent so as to absorb as much “open thinking” as possible.

Disruption is being as innovative and open as our ability to connect to people who can contribute, share their voice, and again inspire us.

Disruption is luck, being open to luck, knowing that luck will play its role and not fearing it. Disruption is dropping “career” for “choice” or, as Gianpiero Petriglieri puts it, creating your own “work of art”.

Disruption is knowing how to look for the next positive Black Swan, as good as the people we like. Disruption means dealing with Obliquity, or looking for our next move knowing in advance that the only thing we know is that we don’t know what’s next.

Disruption is finding satisfaction in people we work with, rather than in what we do.

Emotional intelligence is the ability to identify, assess, and control the emotions of oneself, of others, and of groups.

This is about Emotional Intelligence as a key factor in ensuring our success as leaders and in making “great people decisions”.

The marshmallow experiment is a test conducted by Walter Mischel at Stanford University and discussed by Daniel Goleman in “Emotional Intelligence”, his 1996 book. In the 1960s, a group of four-year olds were given a marshmallow and promised another, only if they could wait 20 minutes before eating the first one. Some children could wait and others could not.

The researchers then followed the progress of each child into adolescence, and demonstrated that those with the ability to wait, or to postpone gratification, hence with greater emotional intelligence, had a far happier and more successful existence by many different measures (starting, for example from scoring an average of 210 points higher on the Scholastic Aptitude Test).

Claudio Fernández-Aráoz is a great colleague and a top global expert on hiring and promotion decisions, repeatedly chosen by Business Week as one of the most influential search consultants in the world.

In a keynote speech at the World Business Forum in New York, Claudio demonstrated the importance of emotional intelligence in making great people decisions.

Inspired by the ‘Marshmallow Experiment’, Claudio presented the results of his own analysis of the three most important characteristics in potential job candidates. While the researchers from Stanford found a correlation between grabbing a marshmallow at the age of four and having behavioural problems in school or drugs problems in later life, Araóz focused on characteristics such as previous work experience, emotional intelligence and IQ.

Awareness of oneself and one’s relationships is more important in being successful than either previous work experience or IQ. Emotional intelligence can help us predict failures in relationships, selecting the right people and in identifying great leaders.

Emotional intelligence is what we need to foster in ourselves and to look for in other people.

This is about celebrating gender diversity and exceptional women in Italy sending a message in favour of exceptional female talent anywhere.

The case of Italy was chosen as a best practice for both a properly working law on diverse boards and the positive effects of its early implementation on overall corporate governance. 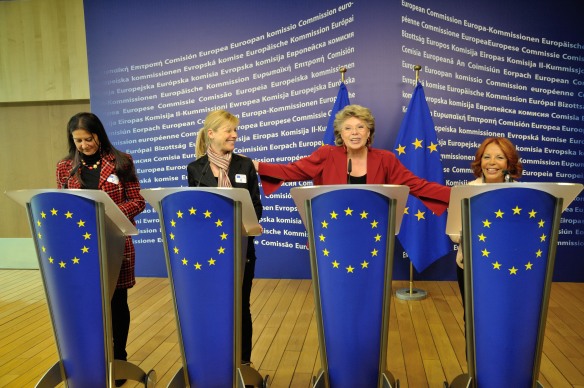 Federiga Bindi, Alessia Mosca, Viviane Reding and Lella Golfo on 7 May 2012 in Brussels

Lella Golfo and Alessia Mosca are two exceptional and exceptionally different Italian women and leaders. Both Members of Parliament elected for the first time in 2008, they are, under many points of view, different. Their stories are different, they belong to different parties, they come from different parts of the country, they differ for many aspects.

Diversity, though, is exactly why they succeeded together.

They united, they shared forces, shared thoughts and emotions. They combined different points of view. They listened to each other, they partially adapted their thoughts to each other’s. They managed to turn their (and their respective parties’) differences into a law, which perhaps neither of them would have been in a position to achieve if alone.

Italy’s law on gender diversity for Board of Directors of listed companies (Law n. 120/2011, dated 12 July 2011, the so-called “Golfo Mosca Law”), coming into force on 12 August 2012, requires, in essence, that Italian listed or State controlled companies appoint a fifth (to become a third at the following mandate) of board members as part of the “under represented gender”.

It does so in such a way that it works.

In fact, not only did Alessia Mosca and Lella Golfo lead the approval process of a visionary law. They also continued to work for its early and effective implementation.

As this law mandates for shareholders to change a number of board members, Italian companies have rightly taken it as a great opportunity to make better use of their Boards.

Hence, whilst not yet in effect, this law was actually implemented earlier by a number of Italian corporates, during the Annual General Meeting season of 2012: exceptional women were selected, overall corporate governance improved. Some leading Italian global companies, such as Fiat Chrysler for example, implemented a smaller board, with a view to fostering its effectiveness.

A great sign of good things coming and more to come.

Exceptional female talent is ever more crucial for the success of Italy and Europe, in one of those defining moments, as difficult as they are, where proper and effective use of talent and leadership can, and will make a difference for the better.

What competencies make up leadership? How much of leadership is technical as opposed to social or interpersonal?

Competencies are behaviours: for professionals, executives, consultants, leaders, all competencies can be grouped into two sets:

In the early stages of someone’s professional development, people-related skills appear relatively less developed, hence we tend to assess and select people on the basis of  hard competencies.  The early stages of one’s professional life are full of episodes where we realise that orientation to results and determination, or technical skills, were the basis of our progress.

After a certain point in life, though, those skills start to decline in absolute terms. At the same time, “social”, interpersonal skills, by then, take off. For best-in-class talent, they continue to grow over time. From that point onwards, growth in soft skills more than offsets the decline in hard skills

The sum of hard and soft competencies can then be measured, over the course of one’s life. The profile of this sum is a very interesting element to consider.

Effective leaders evidence, over time, a profile in line with the example in the following chart: 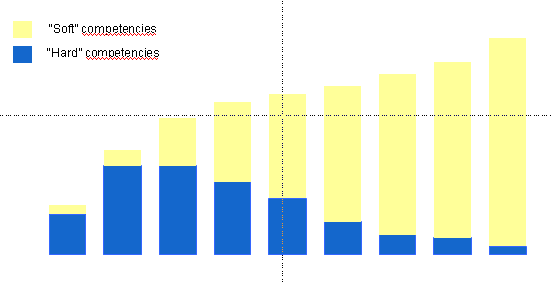 Over time, then, the “sum” of hard and soft skills is a proxy for leadership, as well as for one’s satisfaction. Both grow, from a certain point in time on, if we are able to more than compensate a decline in hard skills.

In other words, all of our incremental satisfaction, from a certain point on, depends entirely on our ability to grow interpersonally.